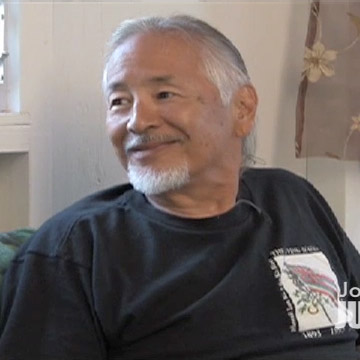 Steve Toyama (2012), is Head of Security at Nation of Hawaii based in Waimanalo, Hawaii. He is well-known for his razor sharp political analyses on U.S. imperialism, American racism, and capitalism. A sansei or third generation Japanese, Tayama studied socialism and the writings of revolutionary Leon Trotsky while attending college.

Journey to Justice : A Conversation with Steve Tayama
In this interview, Tayama reflects on his life (his parents, racism against Japanese after WWII, etc.) and the socio-economic conditions that developed his political consciousness. He believes it is his duty to support those who are oppressed and hence has dedicated his life in that direction. Tayama has worked for many years in the Hawaiian independence movement.