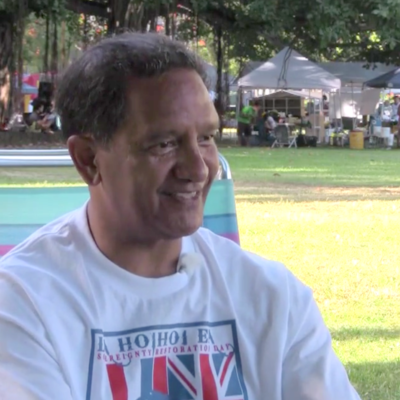 Dexter Keeaumoku Kaiama (2012), is a practicing Hawaiian attorney in Honolulu who credits his wife, Manu Kaiama (a prominent activist, instructor at the University of Hawaii-Manoa, and accountant), for raising his political consciousness by taking him to the island of Kahoolawe (site of political struggle). Keeaumoku lends his legal expertise to the political movement demanding that the United States deoccupy the islands so that the restoration of the Hawaiian Kingdom can occur.

Journey to Justice: A Conversation with Dexter Keeaumoku Kaiama and Eiko Kosasa
In this interview, Keeaumoku discusses how the United States violated its own, as well as international, laws, when it asserted Hawaii to be a U.S. Territory rather than an occupied nation. To bring this legal breach to the table, Keeaumoku files land title cases in U.S. courts, in order to force judges into making political decisions and concede that the issue of land title is clouded in the islands due to this history.

Keeaumoku is also a father and grandfather. In this interview, I began by asking him where he was born and raised.