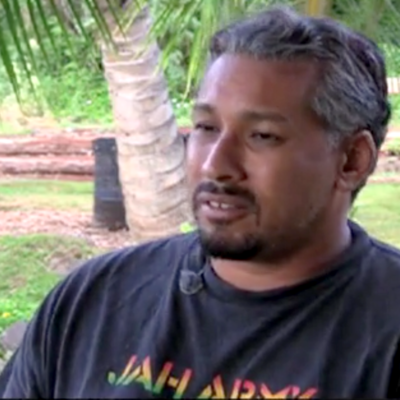 Andre Perez (2012), is a Hawaiian cultural practitioner and community activist/organizer living in Waiawa, Oahu. Mindful of merging Hawaiian cultural practices with political actions, he has engaged in many issues from protecting a Hawaiian burial site on Naue, Kauai to organizing against the Akaka bill (U.S. assimilationist bill) to doing cultural ceremonies for Hawaiian inmates on the U.S. continent or organizing within the Hawaiian Independence movement. Currently he and his family are reclaiming and restoring acreage in Waiawa (next to Pearl Harbor) into a place of healing and education called Hanekahau Learning Farm. Perez says he is creating a Hawaiian space to spread Hawaiian values and culture. People especially youths can learn physical farming and cultural skills as well as have political conversations.

Journey to Justice : A Conversation with Andre Perez
In this interview filmed on Hanakehau Farm, Perez reflects on his life growing up on Kauai learning Hawaiian cultural practices, working on the Kahoolawe Island Clean-up, and being politically influenced by many including Kaleikoa Kaeo and Steve Tayama. Perez ends with his Hanekehau project. For more information on Hanakehau Learning Farm, see hanakehau.com.