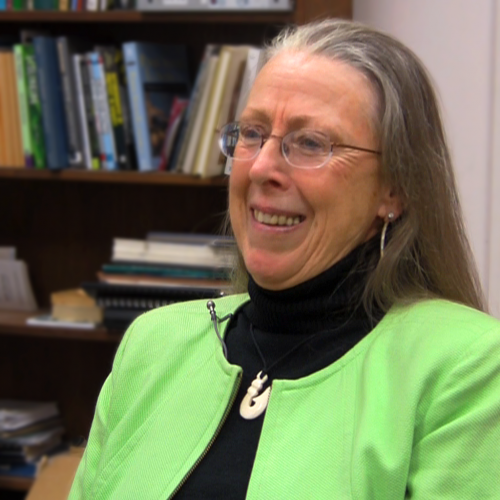 Kat Brady (2013), is the Coordinator of the Community Alliance on Prisons (CAP), an organization that educates the people and lawmakers of Hawai’i about justice issues. Whether sponsoring conferences or presenting testimony at the State Legislature, CAP advocates for solutions that have been proven and are scientifically sound. Through educating the community on Smart Justice policies and Smart solutions/alternatives, CAP encourages people to look at the criminal justice system and society holistically. This comprehensive approach has been proven to be cost-effective in decreasing crime, reducing imprisoned populations, and builds safer communities.

Kat is actively engaged in bringing the community’s voice into venues where it has rarely been heard. A community justice advocate, she looks at the state budget as a “moral document” and organizes to improve civic literacy, public participation, and public policy. Her areas of focus include environmental, cultural, gender and social justice issues.

Kat is the Assistant Executive Director of Life of the Land, an environmental and community action group and the former Legislative Coordinator of the Hawai’i Juvenile Justice Project and the ACLU of Hawai’i. She is the Secretary of Ka Lei Maile Ali’i Hawaiian Civic Club, Chair of the Honolulu County Committee on the Status of Women, as well as part of the leadership of several other community organizations.

Journey to Justice: A Conversation with Kat Brady and Eiko Kosasa (Part 1 of 2)
In Part 1 of my interview with Kat, she credits her mother in getting her on the road to political consciousness. I began by asking her where she was born and raised.

Journey to Justice: A Conversation with Kat Brady and Eiko Kosasa (Part 2 of 2)
In Part 2, Kat Brady, Coordinator of the Community Alliance on Prisons (CAP), further explains how the community can create a more effective and cost-efficient criminal justice system through Smart Justice policies. As an example of Smart Justice, CAP introduced Justice Reinvestment to the Hawai’i State Legislature and succeeded in promoting passage of subsequent bills in 2012. Justice Reinvestment will streamline the criminal justice system process and reallocate existing funds from incarceration to re-entry community programs, including parole and probation work.

Kat is a strong supporter of Hawaiian independence, because she views the high incarceration rates of Hawaiians as being tied to larger historical trauma. Kat is the proud recipient of the 2003 National Association of Hawaiian Civic Club’s Kako’o o Kalaniana’ole Award, which recognized her as the Outstanding Non-Hawaiian for Service to the Hawaiian Community. Kat’s deeply held beliefs in the values of aloha ‘aina and malama ‘aina drive her passion for positive social change.

The Value of Hawai‘i: Knowing the Past, Shaping the Future
click to read PDF